A Flu Shot, A Blood Draw, A Breakfast And An Iron Lung

My day started out with taking my mom to get a flu shot at the Perlman Medical Offices at UCSD Thornton Hospital, where her primary care doctor has his office. The inoculation was administered by a very friendly female doctor who we’d never seen before. Except for a bit of waiting in the reception area, the procedure went very quickly.

From there we walked over to the Lab, located in the same building, to get some of her blood drawn to check her levels before her upcoming CT scan on Friday. That also went extremely quickly and without incident. For me it was a surprisingly relaxing morning.

By the time we finished in the Lab it was late enough in the morning that we both decided it would be nice to visit “The Cove”, the hospital’s cafeteria, for a nice sit-down breakfast. The cafeteria had been recently remodeled and is always clean, the staff friendly and food pretty good. Today was no exception. I ordered a veggie omelet, feeling the need to be healthy since I was in a hospital (which was completely nullified by two strips of bacon), and my mom ordered a large, round waffle covered with blueberries and strawberries and smothered in whip cream. She also decided to add some syrup to her heap. She got stuck twice by needles earlier, so she deserved it.

We ate out in the uncovered patio area, surrounded on all sides by the very tall walls of the hospital. Unfortunately, the incredible noise from the construction of a much taller building right next door was bouncing off every wall we were surrounded by and making conversation practically impossible. We ate without speaking.

As we were finishing our meals I noticed a weird, cylindrical contraption, almost steampunkish in design, about the size of a desk through the glare of glass doors across from me and in the main waiting area of the building. After a brief time of trying to figure out what it was, and with people starting to gather around it, I noticed that one end of it started moving back and forth, almost as if it were pumping something.

Once we were done I headed straight over to see what it was. As I neared it I recognized it as an iron lung machine. It seemed to be very old, but in perfect working condition. I found out that it was on display for today only, and only for a few hours, for Respiratory Care Week at the hospital. Apparently they have this every year and bring this body tank out of storage to show off.

While it was my mom’s turn to wait for me, I chatted for quite some time with one of the nurses staffing this exhibit and she told me that it was built in the 1920s and used primarily with patients suffering from polio during the 30s, 40s and 50s. The patients were paralyzed from the neck down and therefore couldn’t breathe on their own. Their bodies would lie on a thin, uncomfortable mattress on the inside of the pressurized tube, while their heads protruded on the outside. The air being sucked in by a motorized pump underneath would cause the pressure inside to rise, compressing their chest and lungs and making them exhale. When the pump switched to blowing the air out it caused a negative pressure which expanded the chest and lungs, forcing the patient to inhale.

It was a really simple design, but fascinating to watch in action after they turned it on. I asked the nurse if any of the staff had tried it out and she said yes, before they brought it out. She said that it actually felt very natural and was much less likely to cause bodily harm (being non-invasive) than today’s newer, more mobile machines. Huh? She explained that today tubes are placed down patients’ throats, which increases the possibility of trachea or lung damage, and air is then forced in (positive pressure). On the modern day positive side, the patients are much more thoroughly and accurately monitored with many levels being watched. With the iron lung there were nurses eyeballs and one pressure gauge on top. That was it.

The nurse opened it up for me so I could take pictures inside. She described it as a mini submarine, even told me that being inside is referred to as “diving”.

They had an old hospital photo which showed a room full of these iron lungs with all the patients’ heads sticking out. The nurse (I really wish I would have gotten her name, would have been much easier than writing “the nurse” every time…from here on she will be known as “Betty”) told me the hospital even had one large, pressurized room filled with polio patients. All their bodies were in this room but their heads stuck out of a wall on one side. Every patient would breath at the same time with the room’s pressure rising and falling. Even the nurses had to breath in rhythm whenever they entered that room to clean and turn the patients.

I asked “Betty” if the patients had trouble speaking, since that requires breathing. She said that it wasn’t a problem, but they did have to learn to time their speaking to the increases in pressure that caused them to exhale. Then I asked her about the patients needing to go to the bathroom. She said that since they were paralyzed they just went inside the chambers. There were openings on either side of the chambers that allowed the nurses access to either quickly clean up any patients (they had to work very quickly since opening the little doors would immediately depressurize the chambers which meant the patients weren’t breathing) or to turn the patients to keep them from getting bed sores.

Above each patient’s head was a movable mirror that they used to chat with their neighbors in their own iron lungs.

Next to this contraption they also displayed a respirator from the 60s as well as one from today, both allowing a lot more mobility for the patients as compared to the original iron lung.

It was an extremely fascinating look into medicine’s past.  An ingenious breathing machine which, although delivering a terrible quality of life for the polio patients, it at least kept them alive. 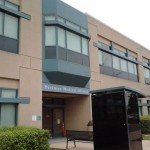 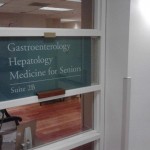 My mom’s doctor’s office is that last one 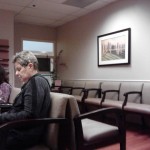 Waiting with only a few others 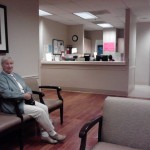 My mom waiting patiently (get it?) 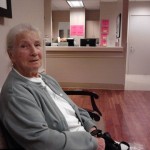 My mom wondering what’s wrong with me 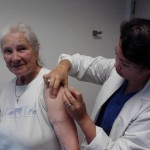 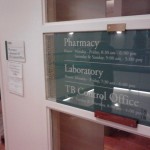 Heading into the Lab 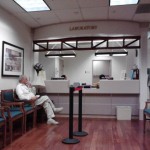 Waiting in the Lab 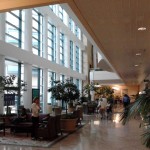 Walking to the cafeteria 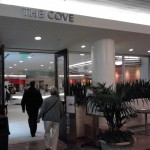 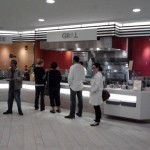 One of two ordering areas 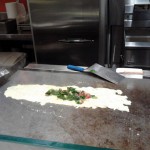 My omelet in the making 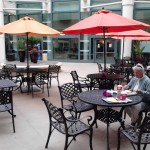 Sitting in the patio 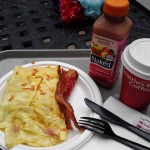 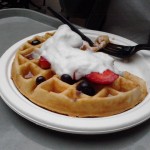 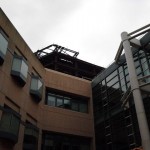 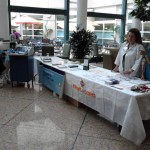 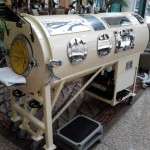 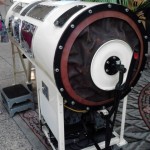 The leather and metal pump 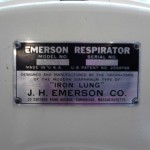 AKA the Emerson Respirator 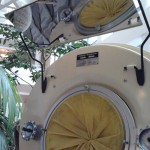 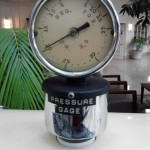 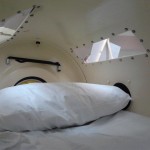 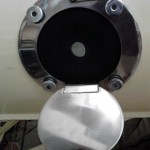 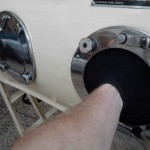 My hand in the nurse’s opening…wait, what? 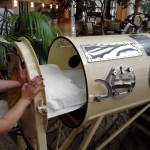 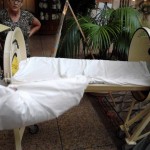 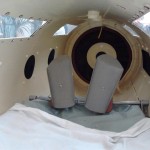 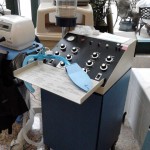 Respirator from the 60s 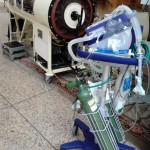