Lilo At The Vet

So on day five of house/dog-sitting for the Tapias while they were enjoying a much-needed trip to Hawaii, something unfortunate happened to poor little Lilo. After jumping off the bed she yelped in pain and seemed a bit afraid to move very much. I couldn’t find anything obviously wrong with her but noticed she was being very guarded and careful with her movements. After checking her paws for any damage I first called the emergency vet to let them know that if she didn’t improve that I might be bringing her in. Even made an afternoon appointment to see a doctor. Then I spoke to Sylvia and Rodrigo to let them know what was going on we decided that she needed to be taken in right away to be checked out, especially since she began to shiver from anxiety.

Leaving Stitch at home I drove Lilo to the Pet Emergency and Specialty Center. She was able to walk in on her own without any problem but she did not want to be taken into the back. I picked her up and handed her off to a nurse. Eventually I was also taken back, but only as far as an empty exam room where I spoke with Dr. Willey. She told me that Lilo had appeared to injure her back somehow, probably when she jumped off the bed. She wanted to run some blood tests to rule anything more serious out, as well as take a couple of x-rays of Lilo’s spine.

At this point Sylvia had called and through my cell phone’s speakerphone the three of us went over the details. Sylvia gave the go ahead for the tests, the doctor went into the back procedure area and I had to wait in the lobby, watching disturbing episodes of Animal Planet on the TV.

After being there for about an hour, and texting with Sylvia the entire time, they finally brought Lilo out, and she was more than happy to be taken out of there. They hadn’t found anything serious and sent us home with two kinds of meds.

UPDATE: Lilo was already doing much better the very next day, after being totally knocked out by the pain and anti-inflamatory meds they told me to give her when she got home. 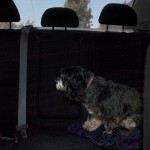 Scared, heading to the vet 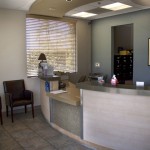 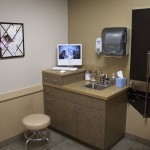 Inside an exam room 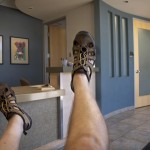 Me anxious, hating the waiting 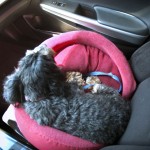 Hey, @StevenMnuchin1. The postal service is vital to our way of life. Give them proper funding! #MailedIt

Supporting humanitarian scientific research is important to me. That's why I donated 9 days of my computer's processing time to @WCGrid last week. Join me! https://autotweet.worldcommunitygrid.org?recruiterId=1115314