Not A Very Super Bowl

Watched the NY Giants defeat the New England Patriots 21-17 in Super Bowl XLVI on a nice, large plasma TV at the Tapias’ house. Except for the last five minutes it was probably one of the most unexciting, even boring, Super Bowl games I had ever watched. Since the three of us are west coasters it was a darn good thing we were more interested in the commercials than the actual game. And as far as the halftime show, except for the costumes and pageantry, I thought Madonna’s halftime show started a bit week. It steadily got better and ended well. Got to give her credit to still be able to perform like that. Most of the much-aniticipated commercials I thought fell a bit flat. Judging by all the beer commercials it still amazes me how there’s an unfortunate can’t-have-a-good-time-without-alcohol mentality in this country. Pretty sad. Nothing against alcohol, drink it myself on occasion, but I don’t need it to have fun. Some of the commercials were very good, e.g. Honda’s Ferris Bueller take-off, Audi’s exploding vampires and MetLife’s assembly of cartoon characters. All in all, it was a good time just hanging out with four of my closest friends. 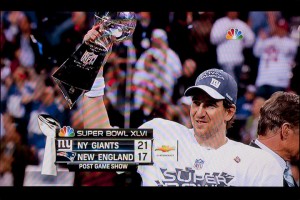 Supporting humanitarian scientific research is important to me. That's why I donated 12 days of my computer's processing time to @WCGrid last week. Join me! https://autotweet.worldcommunitygrid.org?recruiterId=1115314

Congress is in the process of negotiating the next round of COVID-19 emergency funding. We need your help! Urge your friends, family, and community to contact their legislators and ask to include funding for zoos and aquariums. http://bit.ly/HelpZoosAndAquariums Please RT #HelpZoos

Thanks, @RRobDunn, for another fantastically entertaining presentation (virtual this time) at the @SDNHM. I always learn such cool, new awareness, mind's eye opening stuff when you present