Microbes In My Navel

This evening I attended another terrific lecture at the San Diego Natural History Museum. This one was titled “The Wild Life of Our Bodies” and was presented by Rob Dunn, a Ph.D. biologist from North Carolina State University. His lecture basically went over talking points from his book by the same name.

When I arrived I happened to run into Dr. Michael Wall, curator of the museum’s entomology department as well as Vice President of Research and Public Programs, as he was walking into the theater where all the lectures are held. I’ve been to the museum enough times already that he and I are on a first name basis. Yeah, I’m that kind of special.

We exchanged “Hellos” and a handshake and then the person he was walking into the theater with also reached out for a handshake and introduced himself. If I would have been smart enough to realize that he was the evening’s speaker I probably would have told him how much I looked forward to his presentation.

The best way to describe the lecture is to quote from the description about the book from his website.

“A biologist shows the influence of wild species on our well-being and world, and how, even in places like our bedrooms, where we have most completely cleansed ourselves of nature, nature still clings to us – it always will.

“We evolved in a wilderness of parasites, mutualists, and pathogens. But we no longer see ourselves as being part of nature and the broader community of life. In the name of progress and clean living, we have scrubbed much of nature off of our bodies, and have tried to remove whole kinds of life – parasites, bacteria, mutualists, and predators – to allow ourselves to live free of wild danger. Nature, in this new world, is the landscape outside, a kind of living painting that is pleasant to contemplate but also nice to have escaped.

“The truth, though, is that while “clean living” has benefited us in some ways, it has also made us sicker in others, according to biologist Rob Dunn. We are trapped in bodies that evolved to deal with the dependable presence of hundreds of other species. As Dunn reveals, our modern disconnect from the web of life has resulted in unprecedented effects that immunologists, evolutionary biologists, psychologists and other scientists are only beginning to understand. Diabetes, autism, allergies, many anxiety disorders, autoimmune diseases, and even tooth, jaw and vision problems are increasingly plaguing bodies that have been removed from the ecological context in which they existed for millennia.

“Through the stories of visionaries, Dunn argues that we can create a richer nature, one in which we choose to surround ourselves with species that benefit us, not just those that, despite us, survive.”

Throughout the lecture he talked about studies that show possible correlations between exposure to microbes and better health, such as owning a dog as a child in relation to reduced occurrence of asthma, or how the appendix may turn out to be very beneficial to us as a storehouse of good microbes waiting to be released to eradicate harmful ones. And how studies show that there is practically no difference between your pillow and a toilet seat when investigating the number of microbes present.

He recommended (with caveats) walking around outside barefoot, getting dirty, taking deep breaths from nature, gardening, playing with outside dogs, and eating fruits and nuts that our bodies can’t digest very well but that our beneficial microbes thrive on.

He also strongly recommended never using hand sanitizer, which kills both good and bad germs, and just staying with soap and water.

Oh, almost forgot. He also touched briefly on the exciting results doctors are getting from fecal transplants. 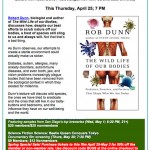 Ad for the lecture 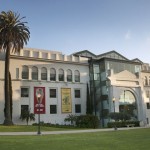 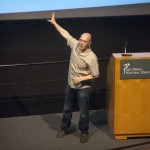 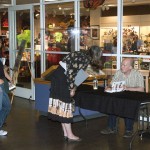 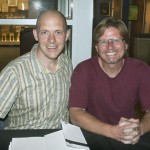 The author and me 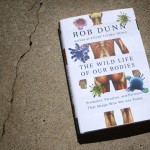 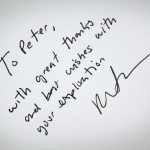 His signing to me

I just added my name to this emergency appeal for climate action by Greta, Vanessa, Mitzi, and Dominika. Sign now and share, and they'll deliver our voices directly to governments at the @COP26 #climate summit. https://fb.avaaz.org/campaign/en/climate_action_now_loc/?wkCgIsb